MicroRNA (miRNA) are short non-coding RNA (ncRNA) transcripts that are produced from a lengthier primary non-coding transcript (pri-miRNA). The primary transcript are double stranded RNA (dsRNA) and have up to ~6 secondary hairpin structure characteristics that allow for the recognition of the miRNA by the drosha-dicer complexes. These hair pins contain the miRNA sequence and they are cleaved from the original by the two complexes, drosha and dicer. First drosha, in the nucleus, cleaves the hairpin from the original structure. Leaving an approximately 70 bp dsRNA (pre-miRNA)that is exported to the cytosol and it is then processed by dicer into the single stranded miRNA. Once the ~22 bp sequence is cut from the primary transcript and separated into single strand RNA (ssRNA) the miRNA is loaded into Ago complexes and used to degrade target mRNAs and induce gene silencing, these mechanisms are speculative and are believed to happen via base-pairing which targets the mRNA for degradation. 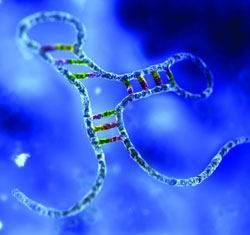