:Abstract: The ability to span 122 years of age [Young et al. 2010] marks humans as a long-lived species. While the modal lifespan in wealthy first-world countries is approximately 75-85 years of age, there exist unique statistical outliers that surpass this life expectancy by 15-25 (centenarians) and 25-35 years (supercentenarians). These individuals are hence attractive models for delayed aging and their longevity is presumed to arise from a wide array of environmental and genetic factors [Finch 2009].

Environmental influences on human aging are made apparent by statistical studies analyzing lifespan as a function of lifestyle or society: Seventh-Day Adventists, who tend to practice a variety of distinct health-related behaviours, have a mean life expectancy of 88 years [Fraser et al. 2001]. Among similarly populated and affluent countries there are sharp differences in the number of recorded supercentenarians. As of 2009, Japan had 20 times the number of living supercentenarians than Germany. Likewise, the United States has had more recorded supercentenarians than Canada, France, Germany, Italy, Japan, New Zealand, Switzerland, and the United Kingdom combined [Young et al. 2009]. Data from a large twin cohort study found that the heritability of longevity was 23% for females and 26% for males, suggesting a powerful role for non-genetic influences on lifespan [Herskind et al. 2005].

For individuals subject to similar environmental factors, however, genetic influences are the chief regulators of aging. The notion of heritable genes modulating lifespan is advocated by the findings that offspring of centenarians are notably protected from age-related diseases [Terry et al 2004] and that exceptional longevity can be family-clustered [Perls et al. 2000]. In addition, centenarians are significantly less likely to be hospitalized than their non-centenarian contemporaries [Engberg et al. 2009].

A recent study by Sebastiani et al. highlights a plethora of genetic signatures associated with exceptional longevity. By performing a genome-wide association study of 801 long-lived individuals (median age of death 104 years) and 914 deceased controls, the authors identified 281 single nucleotide polymorphisms (SNPs) that correlated highly with long age. 137 of these SNPs occurred within 130 genes, many of which are thought to have relevance to aging and age-related disease. The SNP with the most substantial correlation corresponded to translocase of outer mitochondrial membrane 40 homolog (TOM440) and apolipoprotein E (APOE), two genes that have been implicated in the pathogenesis of Alzheimerâs disease. Notable contenders for significance included markers within the disease-associated Werner Syndrome (WRN) and superoxide dismutase 2, mitochondrial (SOD2) genes [Sebastiani et al. 2012].

It is interesting that these genes and systems have been highlighted as potential regulators of exceptional longevity. Each has a unique physiological function and may provide insight into the mechanisms of aging: As the channel-forming subunit of the mitochondrial outer membrane translocase, TOMM40 plays an imperative role in mitochondrial protein transport [Humphries et al. 2005]. APOE is a plasma protein and ligand for low density lipoprotein receptors that participates in the transport and catabolism of cholesterol and lipids [Mathley et al. 1988]. WRN is a DNA exonuclease and helicase involved in DNA repair and SOD2 is a free radical scavenging antioxidant [Sebastiani et al. 2012]. The HLA system is the major histocompatibility complex in humans [Listi et al. 2010] and CETP is responsible for moving triglycerides and cholesteryl esters between lipoproteins [Barzilai et al. 2006]. TSHR bind the pituitary hormone TSH to stimulate T4 production and secretion, a hormone that profoundly impacts metabolic rate and body temperature [Atzmon et al. 2009]. hTERT is the catalytic component of human telomerase reverse transcriptase and hTERC supplies the template for the addition of nucleotides by hTERT [Atzmin et al. 2010].

Of the mentioned genes and systems implicated, they are relevant to current theories that link DNA repair, oxidative stress, immunity, metabolism, telomere length, mitochondrial function, and endocrine control to senescence [Kirkwood, 2005; Candore et al. 2006]. These centenarian-studies lend credence to these theories and support a complex model for aging in which a spectrum of factors play regulatory roles. This is in line with the evidence presented for long-lived species, which suggests that evolutionary tweaking of these biochemical systems serves to limit maximal lifespan. The data also supports the current evolutionary theories of aging, which suppose that longer-lived individuals will have invested in unique mechanisms that promote durability and overall maintenance.

SNPs Associated to Longevity in Humans

There are both common and rare longevity-associated variants that may counter the effects of disease-predisposing variants and extend lifespan. The genetic contribution to average human aging can be modest. Genes explain 20-25% of the variability of human survival to the mid-80s [Herskind et al. 1996; Fraser and Shavlik, 2001]. Genetic factors may have a greater impact on survival to the ninth through eleventh decades [Tan et al. 2008]. Exceptional longevity is typically characterized by strong familiarity [Perls et al. 2000, 2002; Atzmon et al. 2005; Schoenmaker et al. 2006] as well as marked delay in disability [Terray et al. 2008]. It is unclear whether the nature of and contribution of genetic variation to exceptional longevity is due to undiscovered rare genetic variants with large effects and/or the presence of many common genetic variants with small effects [Bloss et al. 2010]. Two supercentenarian (age > 110). The woman was homozygous for HSP70. The man carried a cluster of longevity variants in FOXO3A and both suspects had a variant in IGF1R. Both carried the same genotypes of rs9536314 and rs9527025 in KLOTHO (KL). The two subjects carried the same heterozygous genotype for SNP rs4641 in LMNA and the same homozygous genotype GG for SNP rs1801195 in WRN. In both subjects the most significantly enriched category of genes with novel coding mutations was alternative splicing [Sebastiani et al. 2011].

SNPs in the INS, RAD52 and NTHL1 genes are associated to longevity. The majority of the rare alleles of the identified SNPs were longevity variants, not mortality variants, indicating that longevity is primarily affected by positively acting minor alleles. There are sex-specific differences in the association of the genetic variation with survival during old age. FOXO3A, TERT and TERC were also associated with longevity [Soerensen, 2012].

2 pro-antioxidant SNPs, 1 GH/IGF-1/INS SNP and 3 DNA repair SNPs were found associated with mortality in late life, but it was not possible to replicate this in other populations [Soerensen et al., 2012]. Genetic variants associated with exceptional longevity were determined. Among the 281 SNP was one in APOE with reached irrefutable genome-wide significance. Genetic Signatures of Exceptional Longevity Revisited SNPs associated to aging were near genes that are highly expressed in the brain (HECW2, HIP1, BIN2, GRIA1), genes involved in neural development and function (KCNQ4, LMO4, GRIA1, NETO1) and autophagy (ATG4C) and genes that are associated with risk of various diseases including cancer and Alzheimer's disease [Walter et al. 2011]. ATM promoter nucleotide polymorphism, resulting in moderate expression is associated with longevity [Chen et al. 2010]. FOXO3 coding variants may not be key determinant of human longevity [Donlon et al. 2012].

Variants between different laboratory mice strain were determined [Yang et al. 2011]: http://cgd.jax.org/cgdsnpdb/build37/data/imputedsnps/ As different strains have different lifespans [http://research.jax.org/faculty/harrison/ger1vi_lifespan.html], it can be asked:

A standard DR regimen extends the lifespan of C57BL/6, whereas it remains unaffected in DBA/2 [Forster et al. 2003]. DR shortened lifespan in more recombinant inbreed strains than those in which it lengthened life [Liao et al. 2010]. Longevity under DR and AL is under genetic control, exhibiting 34 and 36% heritability, respectively. Candidate quantitative trait loci responsible for this trait were mapped to chromosome 7, 9 and 15 [Rikke et al. 2010].

SNPs from GIPR, TCF7L2, DGKB, MADD, CRY2, GLIS3, PROX1, SLC30A8 and IGF1 were associated with traits related to glucose metabolism in the Chinese population. SNPs from CRY2 were associated with type 2 diabetes. IGF had significant association to both fasting and 2-h insulin levels as well as insulin secretion and sensitivity indices. Genome wide association study correlates SNPs in JAZF1 in human height determination. JAZF1 was also associated to Type 2 Diabetes and cancer. JAZF1 is a transcriptional repressor of NR2C, which results in low IGF1 serum concentrations perinatal and early postnatal hypoglycaemia and growth retardation when knocked out in mice. JAZF1 has a key function metabolism of growth and represents one of the strongest candidates influencing human height [Johansson et al. 2009].

A meta-analysis of hundreds of GWAS identified 1775 susceptibility SNPs to 105 unique age-associated diseases. These were mapped onto genomic bins. From this several peaks mapped to multiple diseases and mapped to Major Histocompatiblity (MHC) locus on 6p21 and INK4/ARF (CDKN2a/b) tumor suppressor locus on 9p21.3. All 10 significantly enriched bins contained genes linked to either inflammation or cellular senescence. SNPs near regulators of senescence were particularly associated with diseases of aging Review: a meta-analysis of GWAS and age-associated diseases. 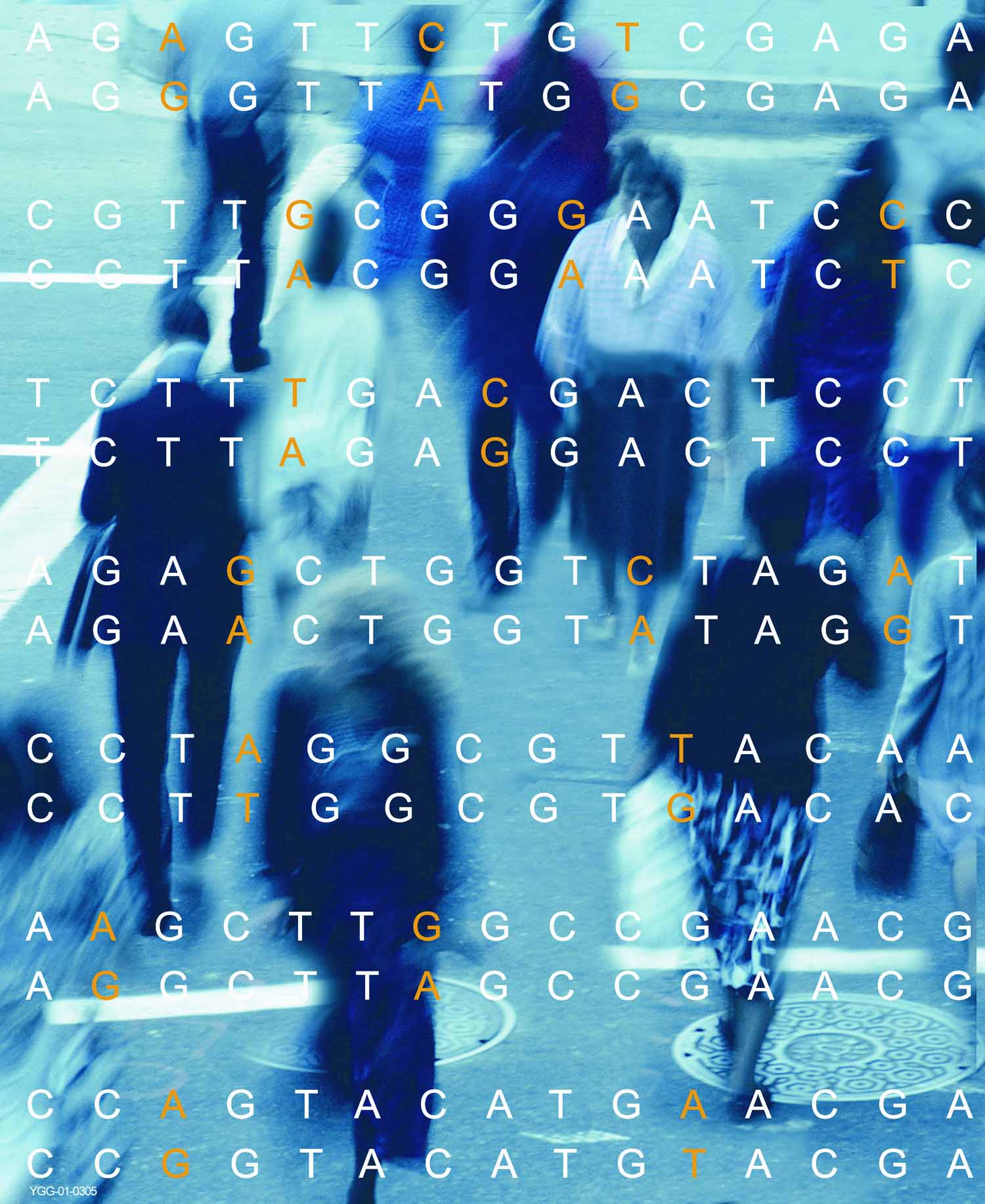