The Unified Process for Ontology Building which is based on the Unified Process (UP) Methodology in Software Development and Unified Modeling Language (UML) is use-case driven which means it is very suitable for Application Ontologies, not so well suited for Domain Ontologies [De Nicola, Missikoff, Navigli,. 2005]. If one has an Application in mind, this is a great way to define and design the Ontologies. For Domain Ontologies this can also be used, but one has to adapt several Steps there. The Goals of this Methodology are very clear for an Industrial Setting. First of all, it is a Reduction of Time and Cost in the Development of large Scale Ontologies as it is always important to make this Process efficient. Secondly it is Quality Improvement of the developed Ontology via progressive Validation of Intermediate Results. Thirdly, this Methodology is for the efficient Collaboration of Knowledge Engineers and on the other hand Domain Experts with clear Separation of these two Roles. Lastly, which is important is that all its Intermediate Results that are achieved in Intermediate Version of the Ontology can already be evaluated by the User of the Ontology and Transition which means again Transition to the next Cycle.

Overall within the Unified Process for Ontology Building one divides the Development Process in Cycles and each Cycle is subdivided into four Phases of Iterations which are Inceptions, Elaboration, Construction. Each single step of Iteration again consists of 5 different Workflows, which is the Requirements, Analysis, Design, Implementation and Test.

The Workflows and Phases are almost orthogonal, which means that the involvement of single Workflows in different Phases of Ontology Development does vary over time on where one already

For example the Requirements Activity in the first Iteration is much more important in than later on when one is already in the Implementation which is in the second half of the Process. Then the most time is spend is shift towards the end, for example testing starts only in the end of the first half and is then mostly part of the second half of the Process. During this Process the involvement of Domain Experts and Knowledge Engineers is different. The Domain Experts in the Requirement and Analysis, i.e. when they try to formulate a Lexicon and a Glossary for the Ontology, then they are involved most. Whereas the Knowledge Engineers come later on when the Design of the Semantic Network, so the Conceptualization Phase starts and the Implementation begins. Then in Testing both are involved. So there is a clear Distinguishing made. 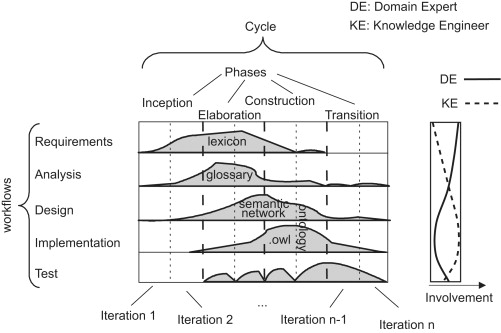