Slow brain waves generated during the deep, restorative sleep that is typically experienced in youth play a key role in transporting memories from the hippocampus - which provides short-term storage for memories - to the prefrontal cortex's longer term "hard-drive".

In older adults, memories may be getting stuck in the hippocumpus due to the poor quality of deep slow wave sleep, and are then overwritten by new memories.

There is a dysfunctional pathway that helps explain the relationship between brain deterioration, sleep disruption and memory loss.

In older adults there is a clear link between the degree of brain deterioration in the moddle frontal lobe and the severity of impaired "slow wave activity" during sleep. On average, the quality of the deep sleep is 75 % lower in older adults (mostly in their 70s) than that of younger individuals (mostly in their 20s), and their memory of the memorized word pairs the next is 55 % worse.

In young age, the deep sleep helps the brain to store and retain new facts and information, but with increasing age the quality of sleep deteriorates and prevents those memories from being saved by the brain at night.

Healthy young adults typically spend one-quarter of the night in deep, non-rapid-eye-movement (REM) sleep. Slow waves are generated by the brain's middle frontal lobe. Deterioration of this frontal region of the brain is elderly individuals is linked to their failure to generate deep sleep. 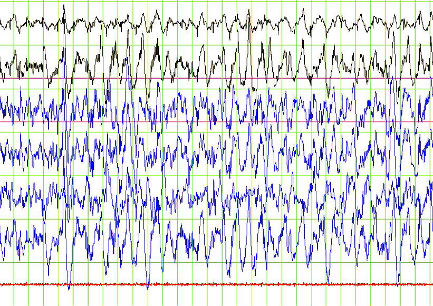