To publish Linked Data there are Rules and Best Practices. There are four Principles. First use URIs as names for Things. Second use HTTP URIs, so that people can loop up those names, thus they are dereferenceable. Third, if someone looks up the URI, one should provide useful Information and one does this by using W3C standards which means by using RDF and SPARQL. Lastly, the most imporant thing is to include Links to other URIs so that one can discover more things.

URIs are used as names for things, so one identifies Things on the Web with Names. For example one can refer to the Content of a Web page by using its address, one can talk about Persons if one uses their identifier in the Dpedia. Therefore UIR can be used to identify information Resources on the Web about things in the real World. One need to use URIs otherwise it is not possible to publish Linked Data.

Then one needs the possibilities to look up URIs. This should be HTTP URIs which means when one looks up the information that is behind this URI either one will get information that is readable for Humans or readable for Machines. This can be achieved via HTTP Content Negotiation. For example with the relaying 303 HTTP Response Code "See other", which is a Redirect Response Code is used in Content Negotiation to differentiate between the HTML Content for the humans or the RDF Content for Machines. This is dependent of the Accept Header of the HTTP Message that is processed. On the other hadn one can distinguish between and information Resource and an Object that is really identified within this Information Resource. For this one can use hash URIs.

URIs are dereferenceable and the information that is behind the URI should be useful and in W3C Standards which means one should use RDF as an universal Data Model for publishing structured Data on the Web and all URIs in the Graph should be dereferenceable. Best Practices is that one avoids certain Constructs in RDF that might cause Problems in Linked Data such as the RDF Reification as it is always difficult especially if one uses OWL and oen wants them to be decidable and computable then one do not has to use Reification because there Classes and Instances or also Relations, Properties and Instances can be mixed up and one can end up in endless recursions for example. Another things is that one should not use RDF Collections and Containers and also not unnamed Blank Nodes. Unnamed Blank Nodes should not be used for Linked Data, simply they are not accessible from outside.

The most important principles is the Linking Principle which means one should include Links to other URIs. This is really important to Link RDF references among Data between different Data Resources, so one can find Data that is related somehow by their Content. One distinguishes there between Relationship Links to other or external Linked Data Resources related to the original Data Entity or Identity Links which are also Links to external Entities, but referring to the same Object or Concept but they are defined in two different Ontologies/Vocabularies for example. There are also Vocabulary Links which are Links that link an Object to its definition of the original Entity.

When one applies the 4 Linked Data Principles, one will end up in a Web of Data. 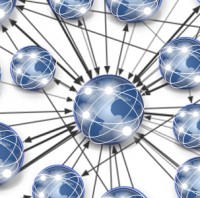