Organism build tissues thay seemingly never use and serve no purpose. Many animals build tissues and structures they do not appear to use, and then they disappear. Computational simulation of evolution suggests that organisms jump through these extra hoops to avoid disrupting a developmental process that works. In a developing embryo, each new structure is built in a delicate environment that consists of everythings that has already beeing developed. Therefore, mutations that alter that environment, such as eliminating a structure, can thus disrupt later stages of development. Structures that are actually not used, may set the stage for other funcitonal tissues to grwo properly. Newly deleveped traits tend to get added at the end of development, because there is less risk of disrupting anything imporant. Thus, this indicates that developmental order does resemble evolutionary order [http://www.biocompare.com/Life-Science-News/119006-Why-Do-Organisms-Build-Tissues-They-Seemingly-Never-Use/]. 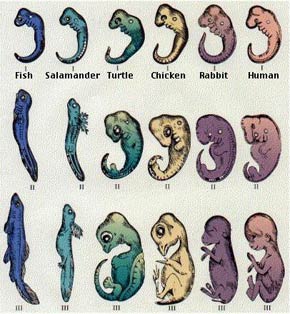