BUB1B (alias BubR1) is a mitotic regulator that ensures accurate segregation of chromosomes through has a role in mitotic checkpoint and the establishment of proper microtubule-kinetochore attachments.

During mitosis, duplicated chromosomes have to be separated equally amongst two identical cells. To guarantee that this process occurs without errors, mammalian cells have evolved a surveillance mechanism, the mitotic checkpoint, that inhibits anaphase onset until chromosome bi-orientation has been achieved. Bub1b is a core mitotic component that binds to and inhibits the Cdc20-activated anaphase-promoting complex, APC/C(Cdc20), a ubiquitin E3 ligase that initiates anaphase by orchestrating separase-mediated cleavage of cohesion rings that hold sister chromatids together [15208629].

Bub1b/BUB1B contributes to proper chromosome segregation also by regulation of the chromosome-spindle attachments [19154723; 15592459]. 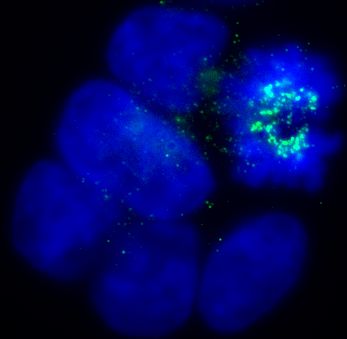