Similar kind of regulation might exist for other organelles in other organisms, such as in the mitochondria of humans. 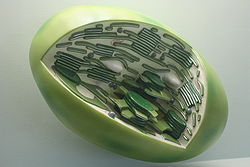