It is well known that aging in multicellular organisms is a process, regulated by a great amount of different factors, and which is not mediated just by accumulation of oxidative damage. Metazoan organisms often have many systems that can compensate damage and repair injury, whether it is on molecular or on tissue level. Pool of undifferentiated stem cells form a body reserve, which can be used in a case of any damage [1]. Multiple regulatory mechanisms can provide plasticity of homeostatic reactions. Immune system protects our body from parasites and malignancies. So, our body has great safety margin.

But with time flow functionality and effectiveness of all this huge machine declines and age-related changes affect work of multiple systems. Vitality of the whole organism falls. Aging begins.

It is thought that aging is the loss of something that is young organism's feature. So main approaches of aging correction is introduction to old organism things that possibly are lost during aging. However, alternative (and less tested) assumption is appearance of something during aging, that is incompatible with youth state and which may be not corrected with just an addition of a substance, typical for a young organism [2].

One of approaches to study aging is the use of heterochronic chimeras. The main aim of it is to investigate interaction of parts or even whole organisms of young and old donors with one another. Results of multiple studies indicate that contact of young cells with old systemic environment mostly is unable to correct age-related changes in old hosts. Moreover, donor cells usually obtain features, which are typical for aged cells [3].

Transplantation of young hematopoietic stem cells from bone marrow was studied actively for a long time in our laboratory with the aim to improve aged immune system. Simple replacement of hematopoietic compound in aged hosts with transplantation of bone marrow from young donors cells into irradiated aged host didn't improve neither aged peripheral immune system parameters nor aged thymus, which was known for its aged-associated atrophy [3].

According to the data of multiple studies, contact of young systemic environment with the aged one during heterochronic parabiosis can induce aging of multiple systems and organs, including immune system, brain, liver, cardiovascular system etc. In the study of H. Tauchi (1976) changes in young heterochronic parabiont's hepatic cells were observed [4]. Hepatocytes of young partner possessed features, typical for older partner. In the study of G. Butenko and Z. Deyl (1990) increased glycation of vessel wall and collagen in young partner has been observed [5]. In multiple studies of G. Butenko and colleagues impairment of young parabiont's immune system has been observed [6]. In the recent paper of Tony Wyss-Corray age-related changes in the brain of young heterochronic has been observed [7]. Also they observed similar changes in the brain of young animals when they have been injected with the plasma of old donors. So, constant flow of young partner's stem cells and plasma factors cannot rejuvenate old partner. Instead of it there has been observed, that young partner acquire many features of aged animal.

So, results of all this experiment suggest existence of some factor, humoral or cellular, which in case of constant introduction to young systemic environment can induce aging. The nature of this factor currently is not known. Prospective variant is non-cellular factors, proteins or their complexes. In Wyss-Corray's study it has been shown that such candidate proteins exist: CCL11, CCL2, CCL12, CCL19 etc [7].However, it should be mentioned, that most of them are chemokines. And chemokines usually are produced locally and in general have relatively small half-life. So they may not be transferred through the blood of parabionts and their source in Wyss-Corray's study is not obvious.

During our experiments it has been observed that exposure of old systemic environment to young one induces age-associated changes in the immune and several other systems of young organism without signs of correction of the same parameters in old organism [8]. We observed changes in costimulatory properties of T-cell niche in the spleen. We also observed intrinsic defects in T-cells' proliferative capacity of aged animals and of animals, which had contact with old systemic environment (young heterochronic parabionts). It may be at least partially corrected with the correction of T-cell niche, as it has been shown during in vitro experiments with co-culture of splenic T-cells from experimental animals and cells of splenic niche from young intact animals [unpublished results]. Worth mentioning is the fact that in several studies of Irina Conboy correction of stem cells' age-related dysfunction has been observed [9].

Currently we want to test several questions, arisen from the previous studies. First of all, we want to investigate the role of cell migration between parabiotic partners in peripheral lymphoid niche in induction of immune system dysfunction in young parabiotic partners. It is known that during aging splenic architecture remodeling occur [10], so we also want to test if spleen also undergoes changes during heterochronic parabiosis.

Another direction of our work is a search of the direct blood transferred aging inducing factor. During parabiosis constant blood exchange between partners occurs. As it has been mentioned earlier, it results in the fall multiple parameters in different organ systems in young heterochronic parabiotic partner. In the study of Tony Wyss-Corray it has been tested possibility of transfer of aging inducing factor with the plasma from old animals [7]. However, in several experiments conducted in our lab no age-related changes in the immune system of young animals, receiving plasma form old ones has been observed [unpublished data]. So, we may expect that this factor may be of cellular nature.

Anyway all these possibilities need to be tested and this is one of directions of our future work. 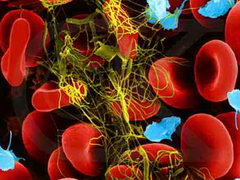