The Brussels Summit of Longevity Activists

The recent Eurosymposium on Healthy Aging - that was organized on December 12-14 in Brussels by HEALES, the European Healthy Life Extension Society - was a smashing success!

The scope and quality of presentations was outstanding, featuring world-class specialists and covering topics from healthy longevity theory to practice to politics.

(All the conference presentations have been recorded and can be found Presentations" href="http://www.youtube.com/user/healesmovies" target="_blank">here, and the program is here.)

Theoretical questions of longevity were covered in the first day, including such themes as the general overviews of ageing theories, molecular damage in ageing, mitochondria and autophagy. The general panel on causes, mechanisms, and interventions in aging, featured Drs. Aubrey de Grey, David Gems, Kris Verburgh, and Diana Van Heemst, and was moderated by Sven Bulterijs of HEALES.

The second day featured an inspiring plethora of promising potential interventions for increasing healthy longevity: genetics of aging and centenarians research, nutritional and pharmacological interventions in aging, biomedical interventions such as repair of damaged mitochondria, destruction of senescent cells, use of telomerase to extend health span, remediation of the Alzheimer’s disease, and regenerative medicine, including both cell material and computational aspects. The summarizing panel - on pathways to concrete healthy life extension in the coming decades - included Alexandra Stolzing, Sven Bulterijs, Kris Verburgh and was moderated by Edouard Debonneuil. Further scientific issues were discussed in the third day, such as blood transfusion and parabiosis and crowd-sourcing support for aging data integration.

The main subject of the third day was the political and social promotion of research into the biology of aging and healthy longevity. Discussion groups were formed and tentative suggestions made for increasing funding for life extension research, improving public opinion of life extension, and scientific positioning of life-extension. Further presentations relevant to the support of longevity research included a review of anti-aging centers and movements worldwide by Daria Khaltourina, and the consideration of premises and suggestions for long term health by Edouard Debonneuil. The latter presentation also proposed establishing a European anti-aging testing facility. The final plenary debate on the political positioning of healthy life extension, included Orsolya Nagy of the European Commission and Ilia Stambler (myself), and was moderated by Didier Coeurnelle of Heales. The debate highlighted the necessity, as well as the difficulty, of promoting research into the biology of aging in Europe. Even though no immediate reportable results followed from these discussions, the possibility of a considerable shift of attitude in favor of aging and longevity research was indicated.

Beside the inspiring scientific sessions, the conference also became a gathering place for some of the world’s toughest, most dedicated life-extension activists. Quite a few of them are formally associated with the International Longevity Alliance (aka Longevity Party http://longevityalliance.org/ ), many others are not necessarily so. Yet, no such formal divisions are really necessary, as we all work for the common goal. As usual with Transhumanists, the meetings were not without personal disagreements. Yet, very happily, all those disagreements were dwarfed and virtually resolved because of our common goal of increasing healthy life for as long as possible and for as many as possible.

Generally, it was an absolute pleasure to meet all these wonderful, kind, passionate and knowledgeable people. (Well, for me personally, the level of competence was somewhat reduced during our informal meetings at the Cafe “A La Mort Subite” (meaning “At Sudden Death” of all places), but the level of communal feeling was certainly up.) In such a relaxed atmosphere it was rather difficult to make any formal decisions regarding the concrete operations of the International Longevity Alliance. We will continue to discuss them by electronic means. Yet, the general sense of community and the sense of the necessity of such an active international lobbying organization was greatly enhanced.

A highlight of these days was the demonstration for anti-aging research and life-extension that we held at the Grand Place square in Brussels. The demonstration was initiated and facilitated by the Russian activists Maria Konovalenko and Alexei Turchin - thanks for this push! It turns out we can indeed act all together, very rapidly and forcefully.

Many thanks to the organizers of the Heales group - Didier Coeurnelle, Edouard Debonneuil and Sven Bulterijs - for creating such a beautiful event, and many thanks to all who participated in it!

Hopefully, more activities of this kind will be coming up!

Ilia Stambler is a post-doctoral fellow at the Center for Multidisciplinary Research in Aging (CMRA), of Beer Sheva University, Israel. Ilia received his PhD degree at the Department of Science, Technology and Society, at Bar-Ilan University. His thesis subject, and his main interest, is the History of Life-extensionism in the 20th Century. He is an activist for life-extension research. 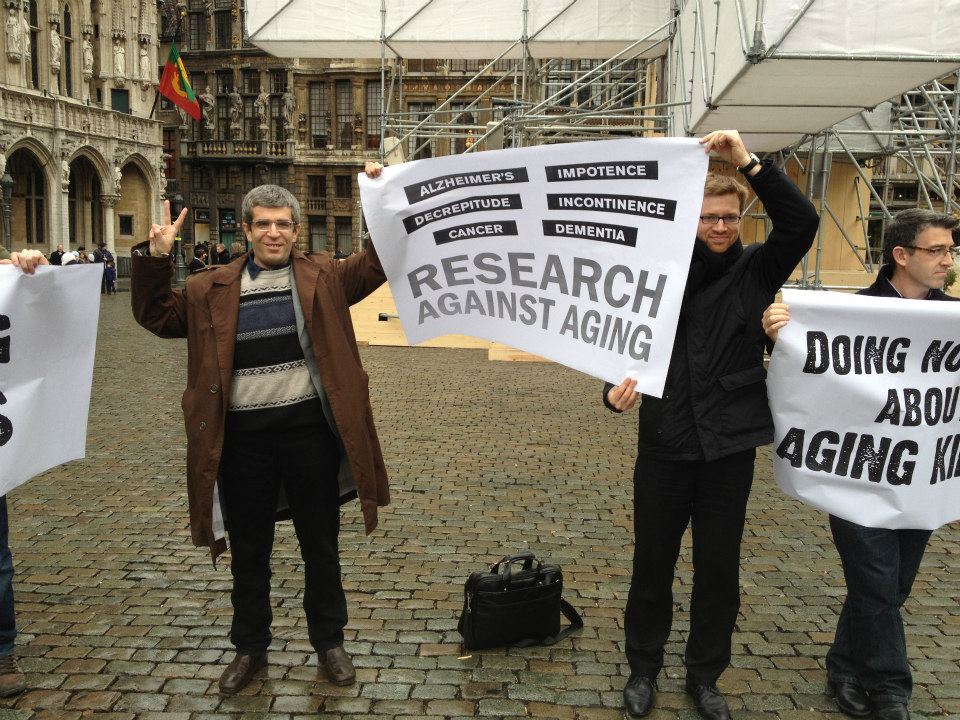