To answer any question like "Why do we age?", a semantic web system or web intelligent system incorporating semantics would proceed something life as follows.

A site a.de collects facts by processing lots of web data. So we get facts like ROS levels increases, telomeres are shortening... and many other facts about aging-related changes.

A third site now might combine facts from a.de and b.de and come to the conclusion using rule learning with some degree of confidence that if x is causing all these age-related changes than x is the cause of aging.

Next normal deductive reasoning allows to combine the rules and facts to arrive to the conclusion which is the answer to the query.

Inductive reasoning is a generation that may or may not be true, rather than a logical detective that is always valid::

Further this new fact is then added back to appropriate part of the semantic way of dealing with facts of this nature.

This vision, the vision of the semantic web is a powerful vision. Its not exactly realized today, but much of the technology needed to express facts and rules, in a form that can be shared, across, different, systems. using XML language such as RDFS, RD, (just called RDF schema, and OWL (Web Ontology Language) has been developed.

The web of data and semantics is in principle possible. The question is how is populating this web. Web scale inference is in some sense also possible. It is not happening in exactly the same way as initially envisioned, but it is happening with efforts such as Google Squared where it is just figured out from the web. This is an attempt to extract lots of different facts from the world wide web. Another recent search engine is Wolfram Alpha which relies on learning lots about th world. There is also Watson, an IBM program that won the Jeopardy challenge. These are technologies that do not use techniques life RDS, OWL and semantic web technologies. Thought they have a similar intent in spirit, which is essentially to learn facts from the web and be able to reason about those facts in a web intelligence system, as opposed to merely searching for web pages.

The semantic web vision is about a web of data and semantics, which is shared so that one can have inference or reasoning at web scale. A bunch of technologies which is designed to enable this. RDF (Resource Description Framework as its expansion is), the Web Ontology Language and various variance of that. These are all technologies designed to enable this sharing of data and semantics across the web. At the same time their use to actually perform reasoning, as not necessarily proceeded in exactly the same way as originally envisioned. Google Squared, Wolfram Alpha, and Watson do in fact reason using facts learned from the web, but not necessarily using the same technology backbone.

The semantic web and some efforts which are in fact learning will certainly realize to decipher the root cause of aging and how to highly effectively solve it. 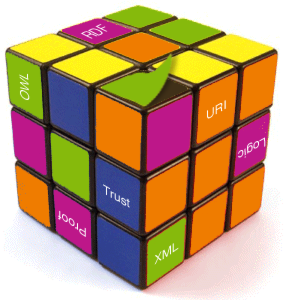