Several studies indicate that gerontogenes and ageing-suppressors have distinct different functions. For instance, a genome-wide screen for yeast mutations which confer altered chronological lifespan revealed that ageing-suppressors are involved in vacuolar protein sorting, autophagy, and mitochondrial function, while gerontogenes such as ACB1, CKA2 and TRM9 are implicated in fatty acid transport and biosynthesis, cell signalling and tRNA methylation, respectively [Fabrizio et al., 2010].

There are three ways to extend lifespan: increasing early or late survival rates, or delaying senescence. The first two do not affect basic ageing process. The first one increase only mean but not maximum lifespan, while the second one leads to change in a maximum but not mean lifespan. Delayed senescence leads to a significant increase in both the mean and maximum longevity [Iliadi et al., 2012]. Therefore we categorized whether a genetic manipulation affects mean and/or maximum lifespan.

Gerontogenes need to be suppressed, while ageing-suppressor genes have to be enhanced in their activity. The goal is to identify the processes, pathways and proteins which need to be drug-targeted to interfere with the ageing process in order to delay, stop or even reverse age-related changes.

Moreover the transcription factors controlling gerontogenes and ageing suppressors need to be identified as well as the significant interaction partners in all species.

Molecular interaction networks of ageing-associated genes for a defined species (e.g. C. elegans) were generated and the genes were visualized according to the categories (gerontogenes vs. ageing-suppressor genes) they are belonging to (for instance as colour of nodes border lines) in order to gain better insight into the regulatory mechanism governing lifespan decrease / increase.

Moreover the network properties for the interactomes of gerontogenes and ageing-suppressor genes, ageing- and dietary restriction (DR)-associated genes were compared.

Gerontogenes and ageing-suppressor genes have different network topological features such as connectivity (eventually also regarding in-betweeness and centrality). Additionally, it is possible that they are clustered differently. Gerontogenes have distinct functions, are acting on different processes or a localized to other compartments than ageing-suppressor genes. Therefore, a functional enrichment analysis is required.

An interaction network of negative ageing-suppressors identifies ubl-5 (Ubiquitin-Like family) as a significant interactor (7 of 94 interactions; p-value < 0.05). Ubl-5 is a key transcriptional coactivator of mitochondrial unfolded protein response (UPR), which is indispensable for the increased lifespan of mild mitochondrial electron transport chain (ETC) inhibition. Its expression is required during the same developmental window as decreased ETC to extend lifespan. 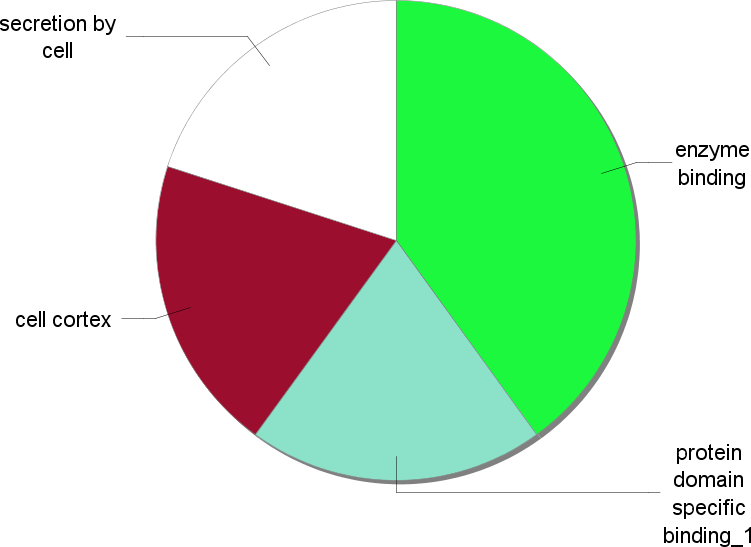 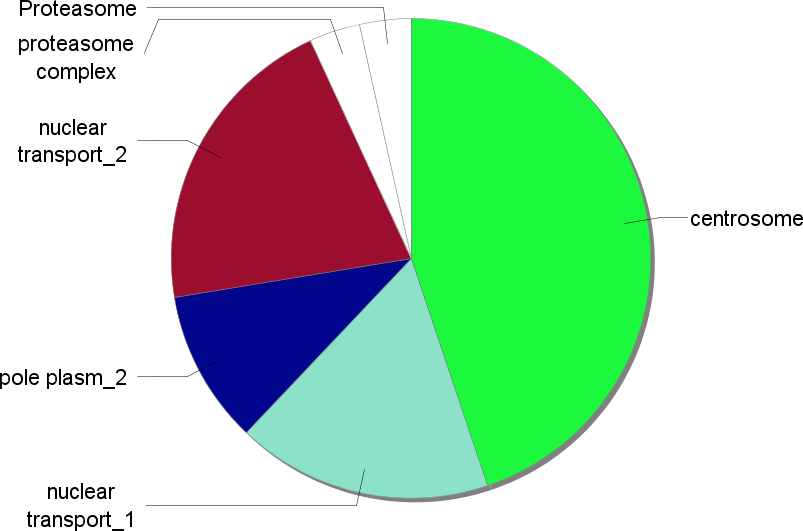 Network Properties of Gerontogenes, Ageing-Suppressor Genes, Ageing- and DR-Associated Genes Interactomes Differ Remarkably from Each Other

A site-by-site network features comparison regarding connectivity of gerontogenes, ageing-suppressor genes and ageing- as well as DR-essential genes generated networks reveals that these sets of genes have strikingly different connectivities [Table: Network topology; Figure: Average number of specific and total interactions as well as specificity]. 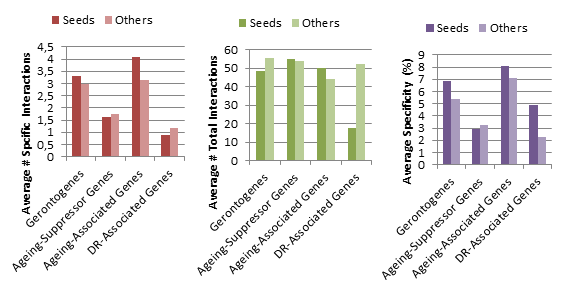 Figure: Average number of specific and total interactions as well as specificity.

In contrast, ageing-suppressor genes have a slightly lower number of specific (1.6 vs. 1.8%) and slightly higher number of total (55.0 vs. 53.7) interactions and a significant lower specificity of interacting to each other (2.9 vs. 3.3%).

Ageing-associated genes (gerontogenes and ageing-suppressor genes together) have a higher number of specific (4.1 vs. 3.2%) and total (50.2 vs. 44.2%) interactions and a significant higher specificity to interact to each other (8.1 vs. 7.1%). 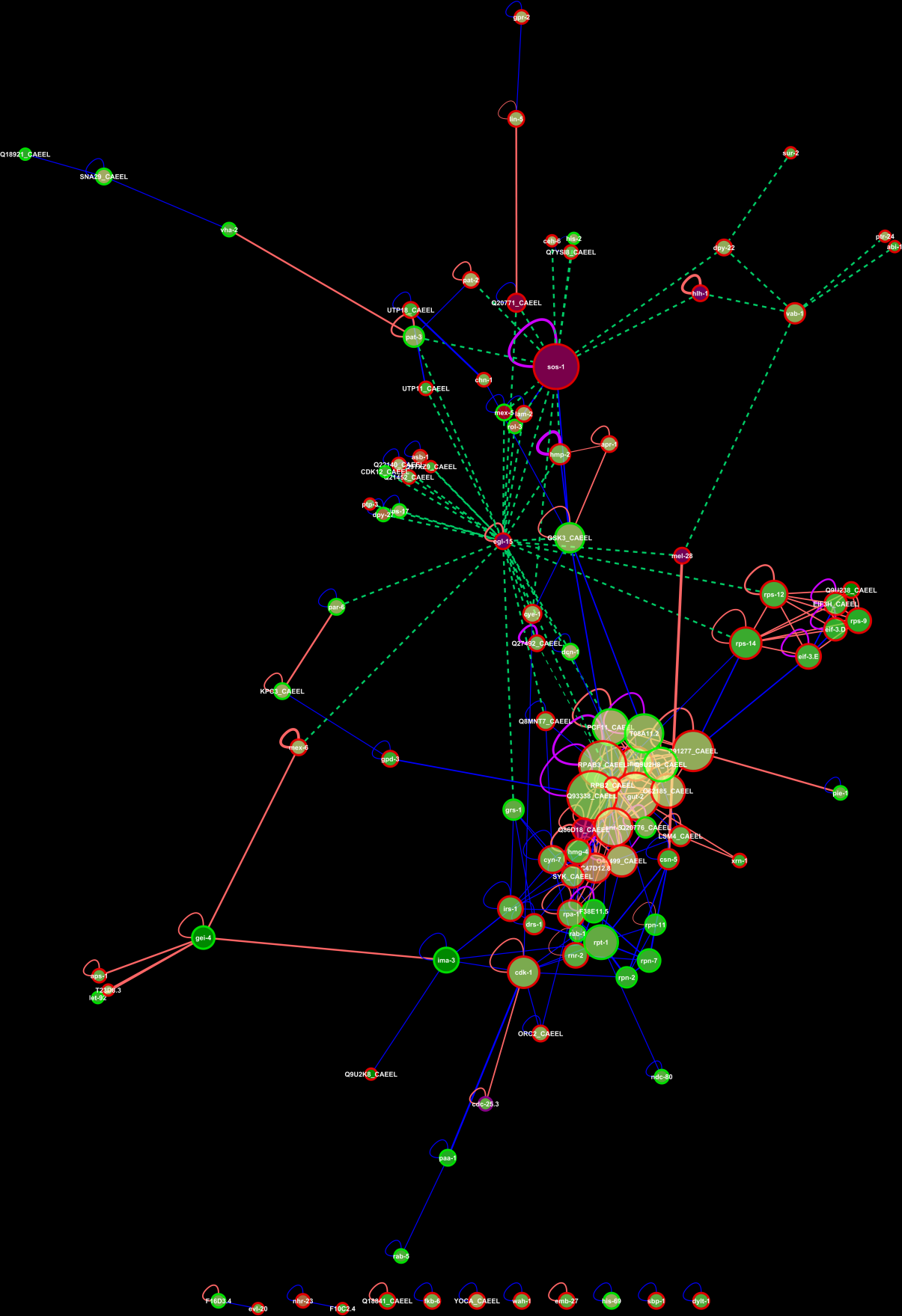 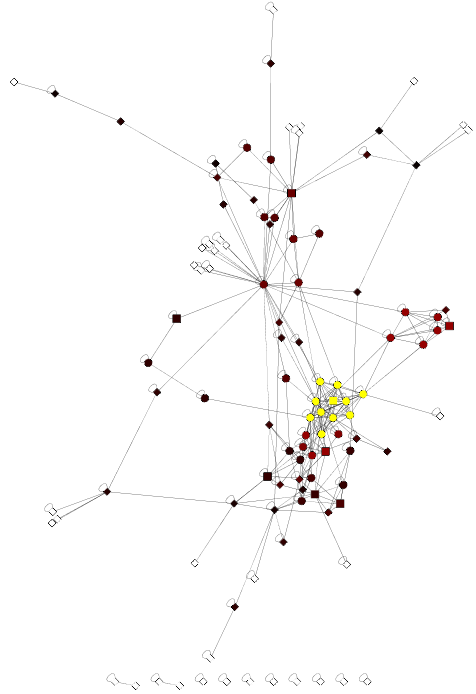 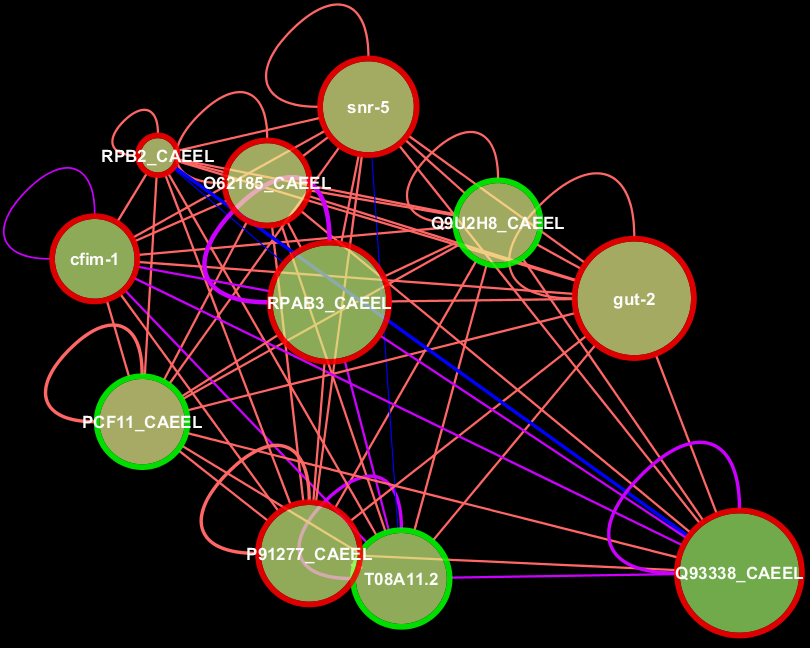 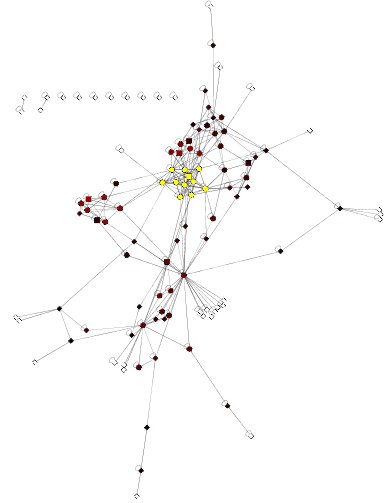 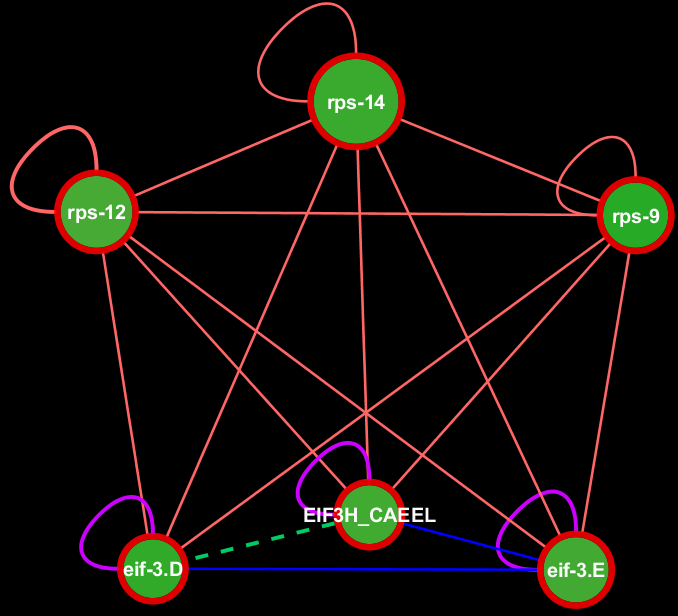 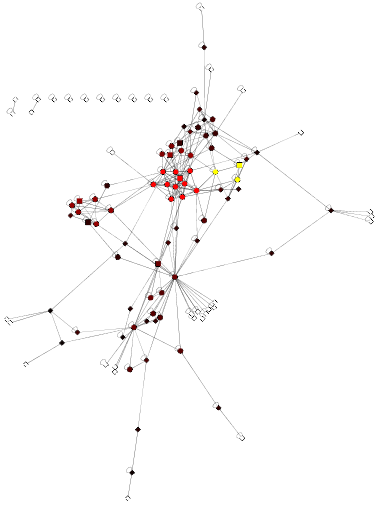 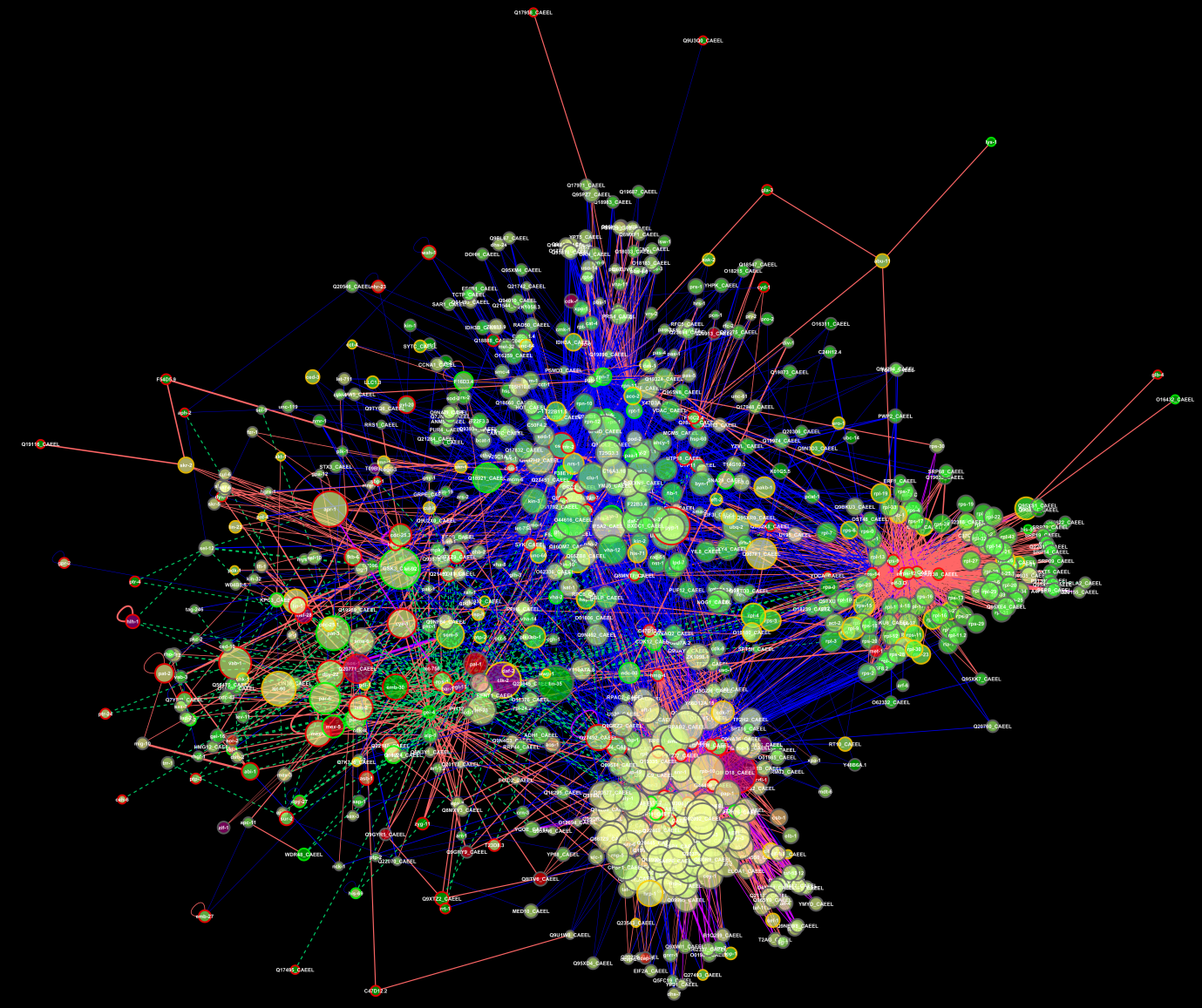 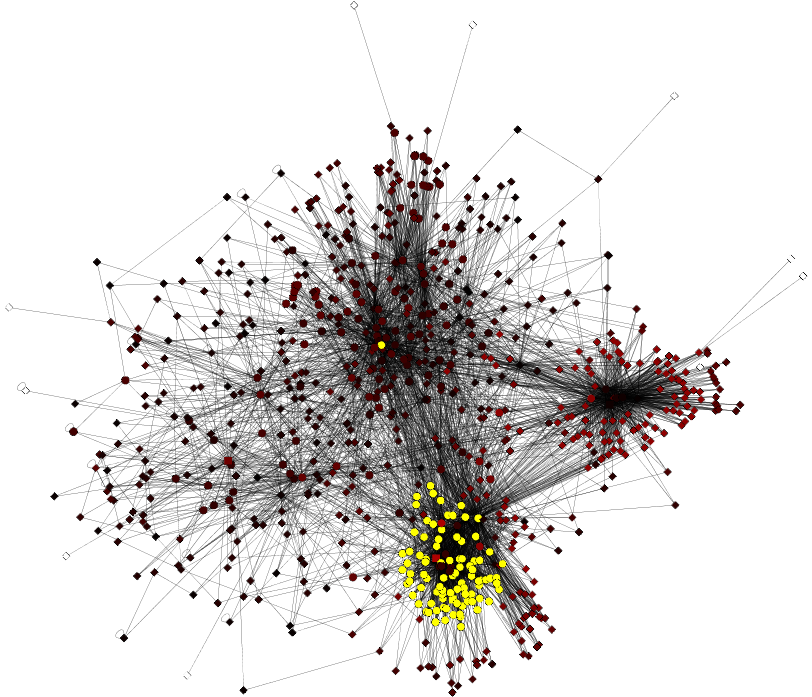 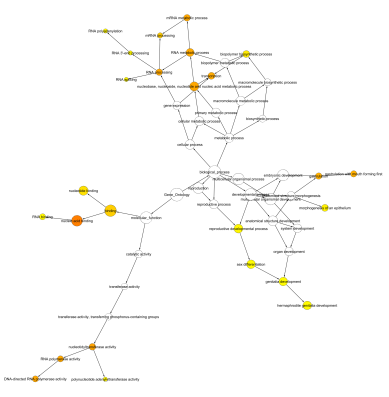 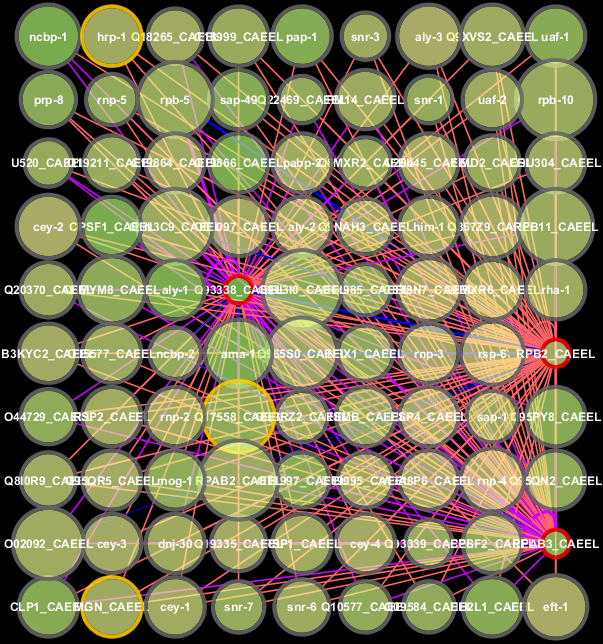 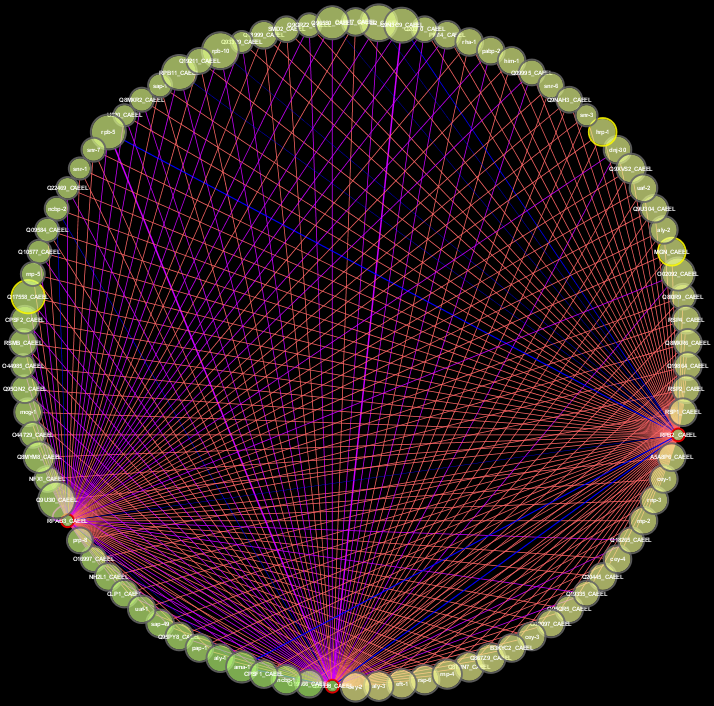 A 20 node cluster with two gerontogenes (SYK_CAEEL and irs-1) in the centre as well as one unclassified ageing-associated gene (nrs-1) in the periphery [Figure: Nucleotide biosynthesis and tRNA loading cluster; Table: Cluster involved in nucleotide biosyntheses and tRNA loading - Gene ontology enrichment] contains enrichment in terms of the enzymatic activities for coupling amino acids to tRNAs. 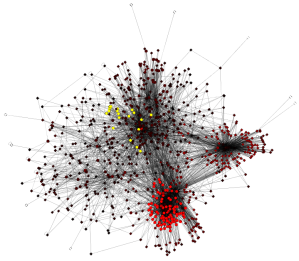 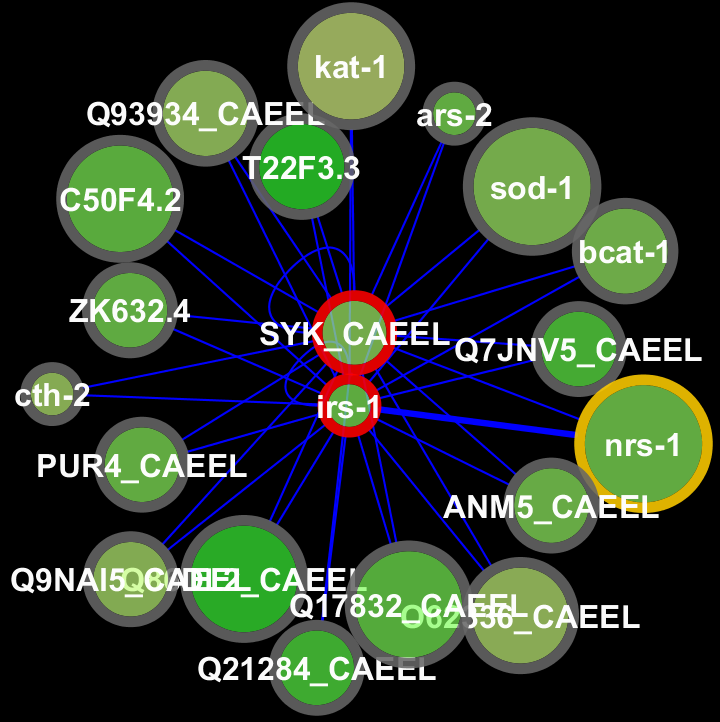 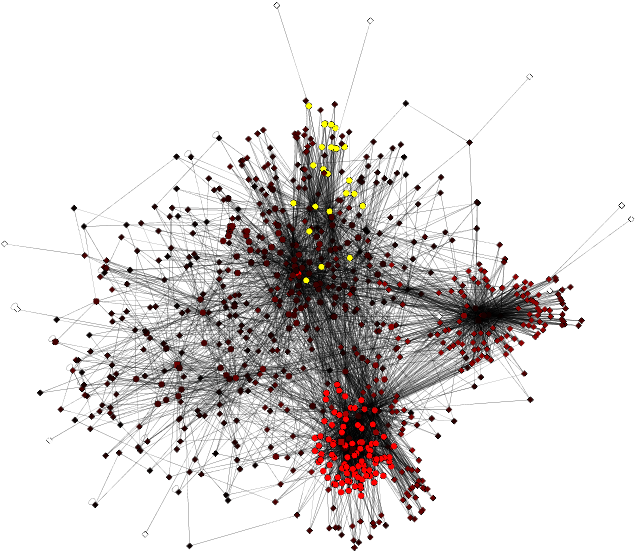 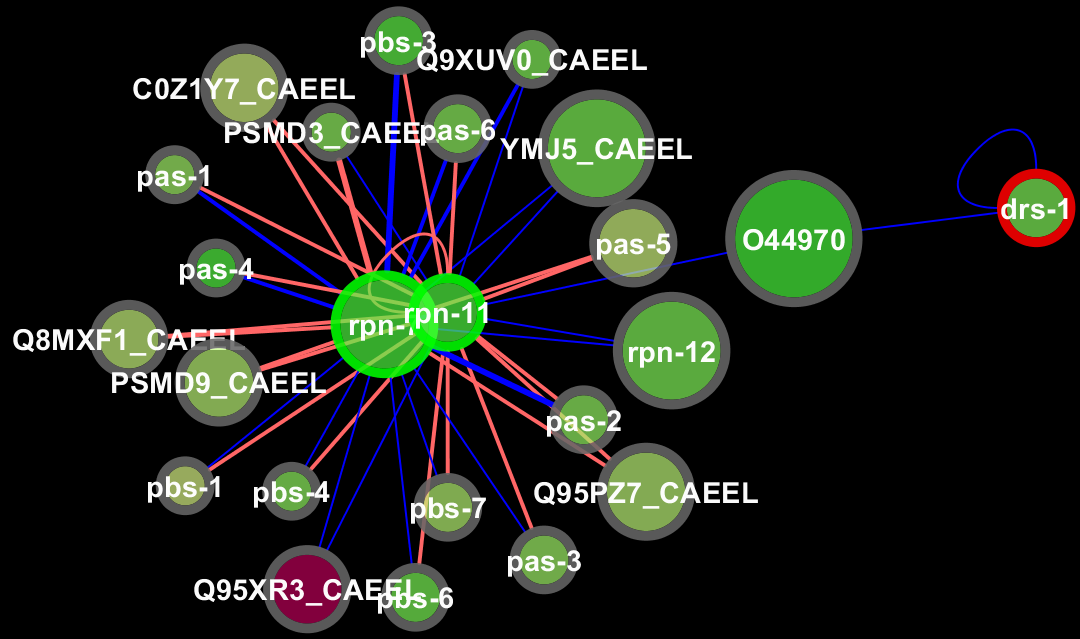 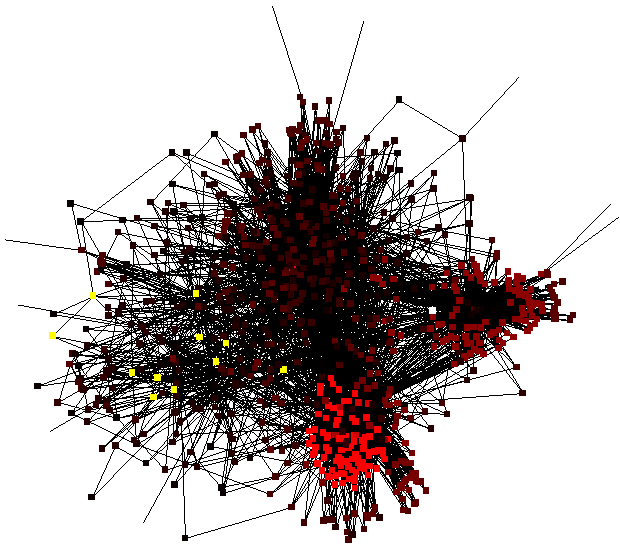 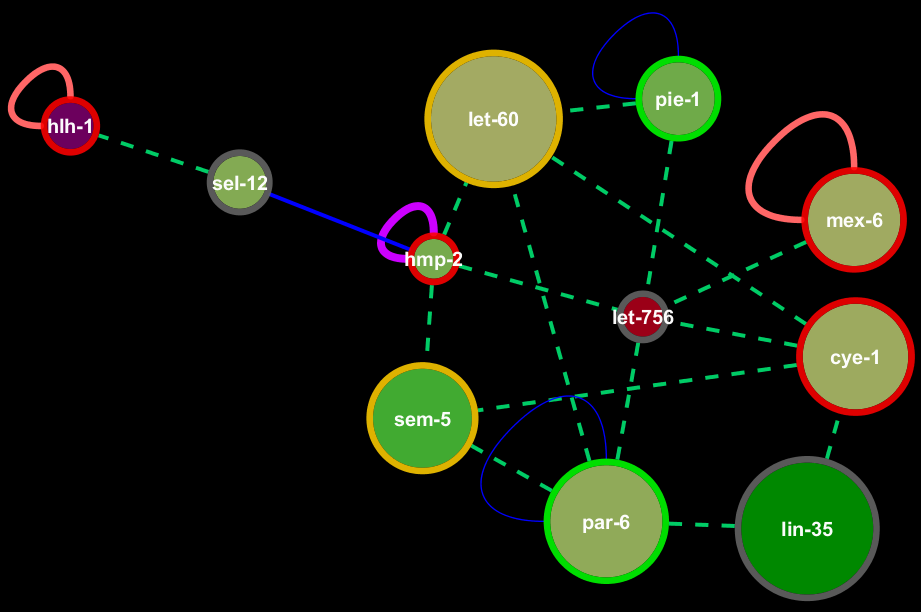 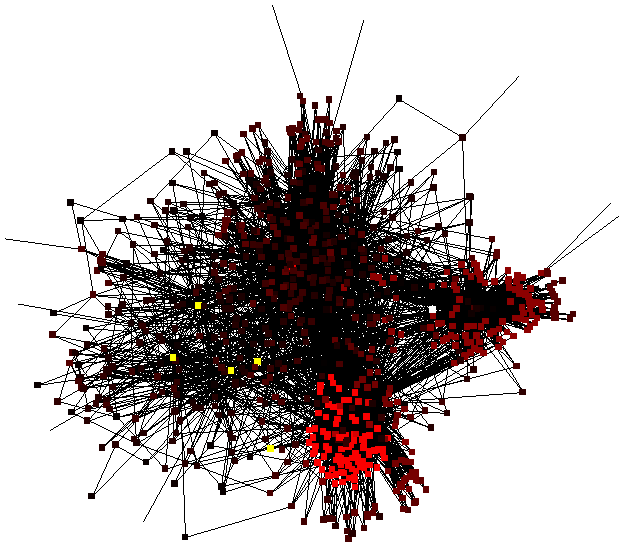 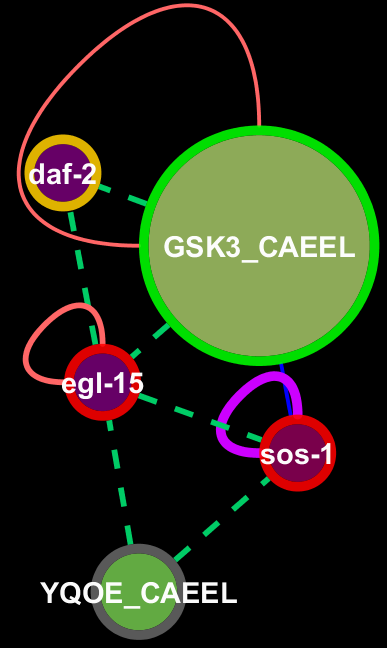 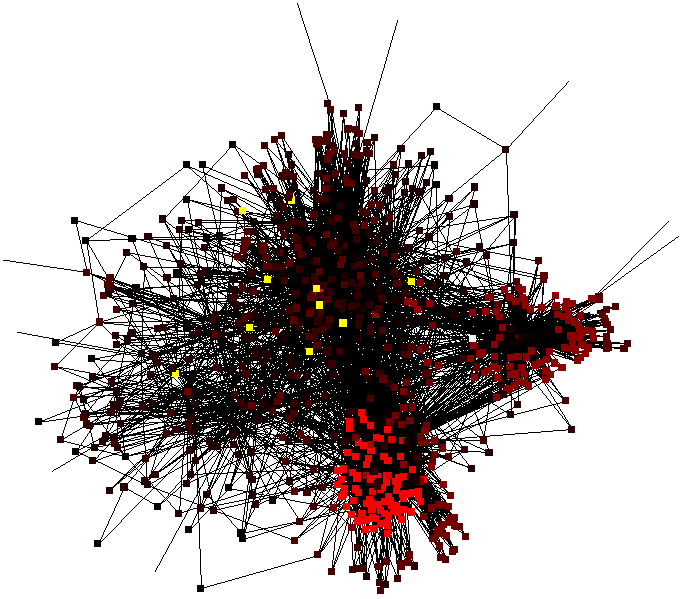 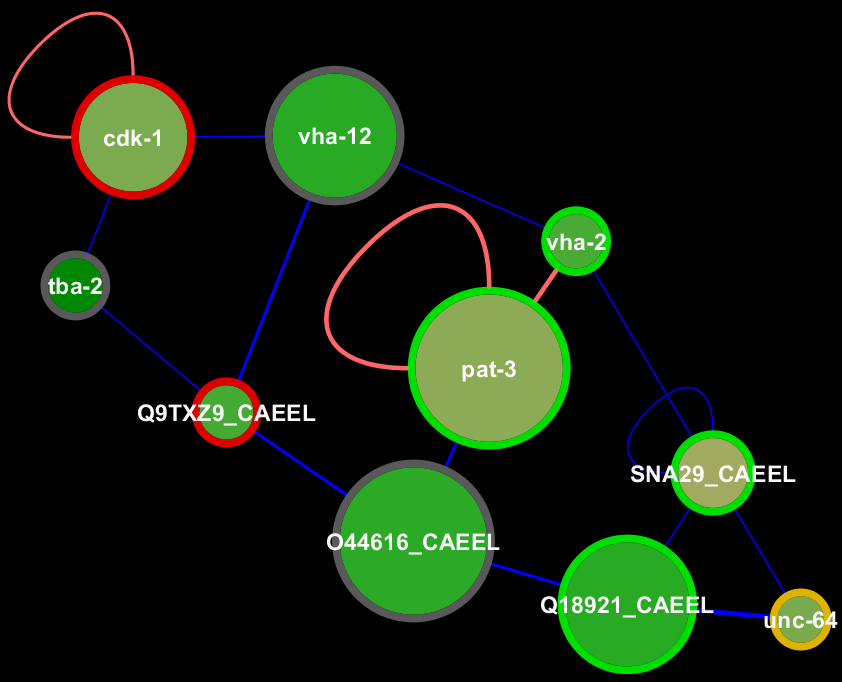 Level 2 Network of Ageing-Associated Genes with a Reduced Complexity

By excluding interactions, which were not annotated as physical or genetic, a less complex network was generated [Figure: Interactions with genes that interact at least_with two ageing-associated genes and interactions among ageing-associated genes whereby all interaction not classified as physical or genetic were excluded]. This procedure revealed an additional cluster, previously not detected by MCODE algorithm, with significant enrichment in gene ontology terms. 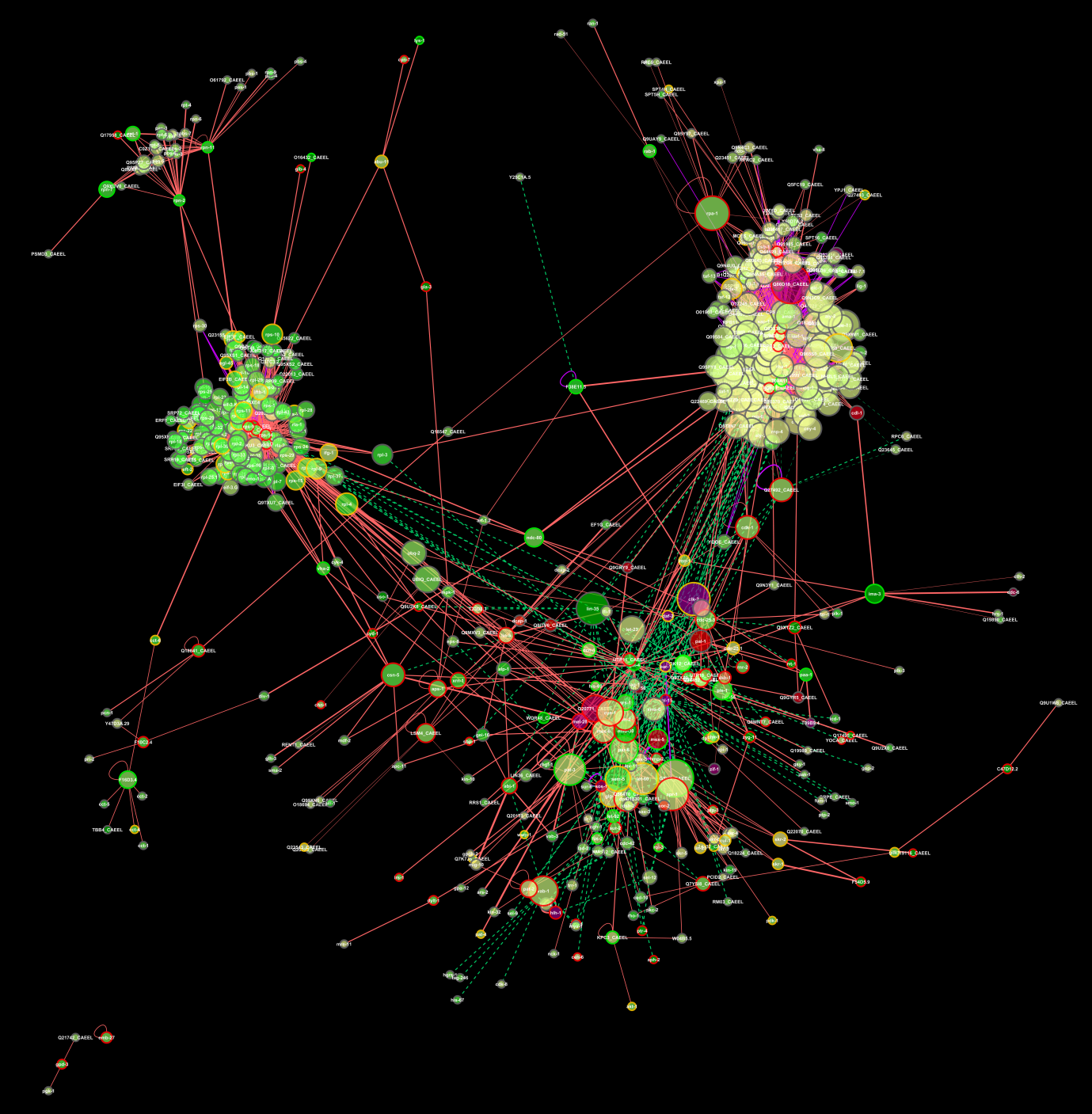 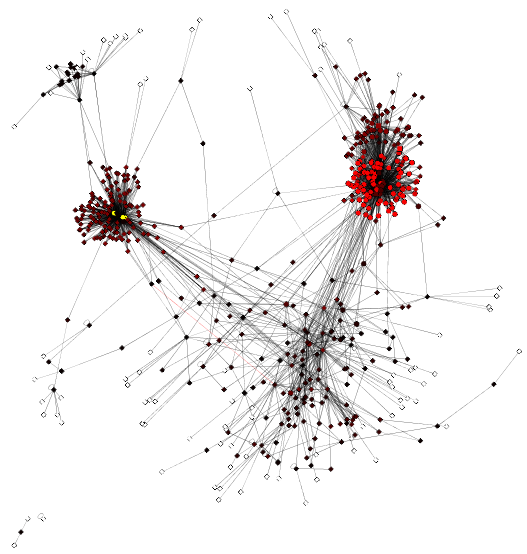 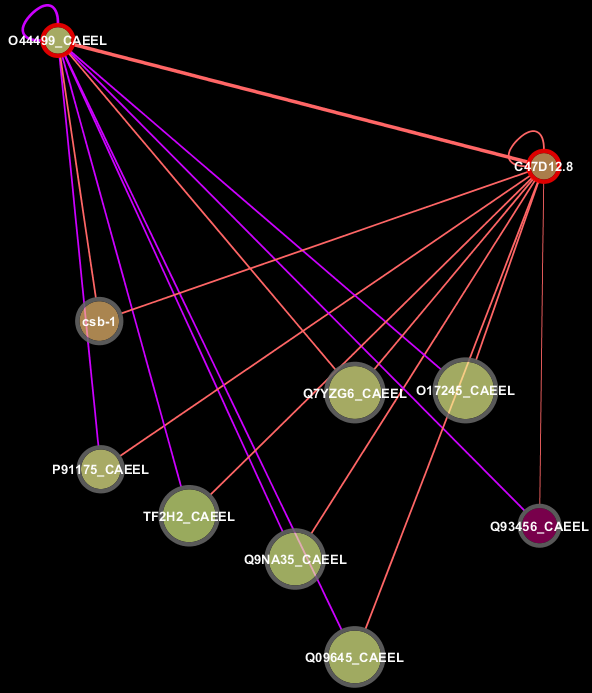 Gerontogenes and ageing-suppressor genes share similar functional terms, namely enzyme and domain-specific binding as well as cell cortex and secretion. Indicating that both regulating processes which can be studied on the level of protein-protein and protein-metabolite interactions.

DEAD/H-box RNA helicase, which binding were associated to ageing-suppressor genes are important for RNA metabolism and transcriptional regulation [Fuller-Pace, 2006].

In networks of ageing-associated genes, gerontogenes were found to be clustered alone as well as together with ageing-suppressor genes.

Firstly, clusters containing only gerontogenes participate in tRNA biosynthesis (e.g. enzymes), translation (such as ribosomal components or elongation factors) and RNA-processing, germ-line development and differentiation, as well as guarding (response to various stresses) and repairing the genome.

Thirdly, clusters containing both kinds of ageing-associated genes function in the control of development and growth, phosphorylation mediated signalling, transmembrane transport, and regulation of cell death.

Hubs like sos-1 (son of sevenless homolog, ras nucleotide exchange factor) and egl-15 (a kinase), both are gerontogenes are interacting with gerontogenes as well as ageing-suppressor genes (equal or unequal amount?). Therefore, they could function as information integrator and produce an integrated output.

Can a gene also be both gerontogene and ageing-suppressor genes depending on circumstances (e.g different environmental factors, diet)? Sir2 activity for instance, is on the one hand reported to extend replicative lifespan, but is on the other hand limiting maximal chronological lifespan extension [Fabrizio et al., 2005]. This case could be attributed to unicellular organism specific phenomena, but it was suggested that also Sirtuins in higher organisms also have anti-ageing and pro-ageing features. Therefore the categorization need to be interpreted carefully and exceptions of this simple categorization are important too. It is possible that regulatory environment of a gene/protein needs to be taken into account to understand this, rather than single genes/proteins.

It could be considered also to annotate if a gene is related to DR or an ortholog of a gene associated to one of these categories in another species.

It would be very interesting to use this classification method also in directional networks, with information about the influences of interaction (i.e. activating or inhibiting).

Additionally, all genes documented in GenAge were marked as ageing-associated.

Interactions for ageing-associated genes were retrieved from an integrated interaction datasets from various sources (> 18). Interactomes of different sizes (Level 1 - 5) were generated and visualized via Cytoscape.

General network properties were determined as previous described in [22912585].

For clustering the MCODE algorithm was used and functional enrichment analysis was performed with ClueGO for gene lists and with BiNGO for clusters in networks. The following ratios can be used:

Table: Cluster of ribosomal components - Genes and their connectivity features

Table: Cluster involved in proteasome - Genes and their connectivity features

Table: Comparing the network sizes generated from different seed lists for species Caenorhabditis elegans out of 76647 interactions in total

Table: Properties of the network generated by different classifications of ageing genes

Table: Properties of the network generated by different classification of ageing genes with average of averages